Type of paper: Research Papers Subject: AccountingWords:  2568
Bonuses and discounts give up to
20% OFF!
Write my paper now!

The purpose of this paper is to critically evaluate the two approaches to managing business, which are called Beyond Budgeting and Better Budgeting. Furthermore, the empirical evidence use and various motivational theories will be discussed so as to define the best way of budget setting for accounting manager.

Beyond Budgeting and Better Budgeting Approaches to Managing Business

The first management model that will be considered is Beyond Budgeting. It was developed as a means to change the situation that was often met by different organizations, when the management process related to budgeting, such as the way of setting goals and strategies, allocating resources, actions coordination, etc. were not neutral in terms of management behavior and thinking. So, there were defined ten reasons why budgeting caused considerable problems and should have been replaced:

So, it is obvious that the budgeting in this way was designed not for working on several tasks with an emphasis on speed and autonomy, but instead for large companies with deep hierarchies (Beinhocker, 2006).

As a result, the traditional management model can be summarized in the following way: 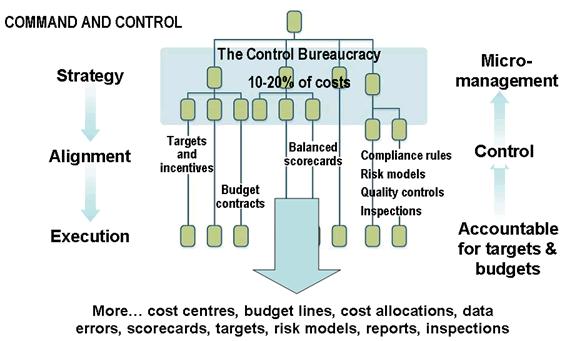 The Beyond Budgeting model offers an effective alternative to the existing traditional model. The proposed changes are presented in the form of Table 1.

Table 1. Beyond Budgeting model compared to the traditional management model. 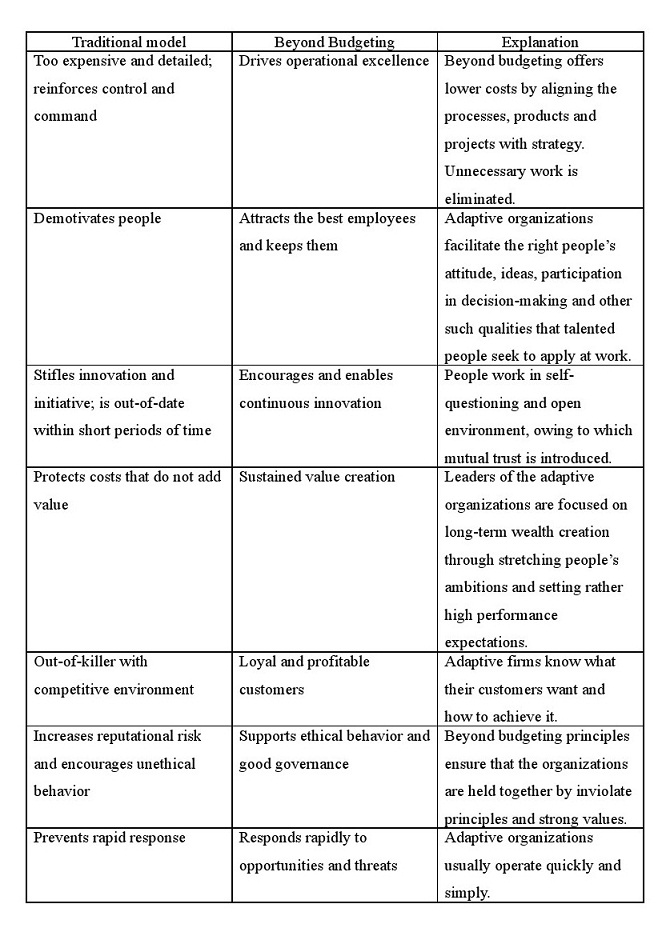 In order to reach such a style of management, it is necessary to rethink the traditional vertical organization and change it into the one to face the customer. The basis of the Beyond Budgeting model is rethinking team-based accountability (Bogsnes, 2009). 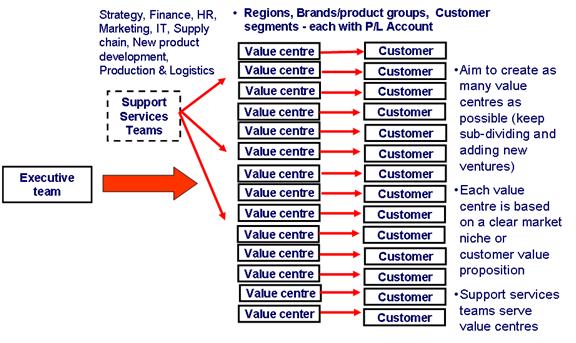 In Beyond Budgeting model there are three kinds of teams: executive team, which is responsible for setting goals and purpose and maximization of other units’ performance; support services teams that support and serve the value centers; value center teams, which formulate strategy, deliver value and invest capital (Hope, Fraser, 2003). Besides, there are usually project teams formed, but they are project-specific and temporarily established.

There are 12 principles of Beyond Budgeting approach that were developed on the basis of evidence collected during 12 years (CIMA, 2004). They combine the best of the best practices of world leading organizations so as to define the best budgeting model. The list of principles is as follows:

I Governance and Transparency

There are seven steps that are necessary to be made in order to implement the Beyond Budgeting model into reality (Hope, Fraser, 2001):

According to the Better Budgeting approach, there are five techniques that are believed to generate improvements (Neely, Bourne, Adams, 2003):

In order to improve the accuracy and focus of budget outputs, it is reasonable to use zero-base and activity-based budgeting techniques. But in this case, there is a problem – they involve even more work than the traditional budgets. It is the main reason why it Is not recommended to use them on regular basis.

Rolling forecasts and budgets has the most potential as a better regular budgeting approach. Many organizations have already introduced it successfully to overcome the traditional budgeting time-lag problem and improve the accuracy of their forecast.

Profit planning and value-based management are more theoretical than broadly adopted. It is hard to evaluate their efficiency, as very few examples of implementation techniques and practical applications exist. On the whole, there is no universal approach to better budgeting that can solve all the problems at once (Bunce, Fraser, Woodcock, 1995).

Now let us consider the motivational theories and the use of empirical evidence in them, so as to define the best of them for accountant management purposes. First of all, it is necessary to understand that motivation is a complex issue, and in terms of management they are based on the needs of individuals (CliffsNotes.com, n.d.).

The first theory we are going to analyze is the content theory of motivation, which is focused on the specific factors motivating an individual. These specific factors are found within a person, but at the same time things surrounding him/her can exert influence as well.

It is clear that all people have some needs that they want to satisfy. Among them it is possible to single out the primary needs, such as ones for sleep, food, and water. They deal with the physical aspects of human behavior and are still considered unlearned. The needs of this kind have biological nature and are relatively stable. The influences they have on people’s behavior are obvious and, thus, are easy to be identified.

Another group of need is called secondary needs (Reid, 2002). As distinct from the first group, these needs are of psychological nature and are learned through experience. Thus, they deal directly with empirical evidence. They usually vary considerably by individual and by culture. These needs consist of internal states, such as the desire for achievement, power, and love. Interpreting and identifying these needs is more difficult, as they are demonstrated in a variety of ways. At the same time, they are responsible for exactly the kind of behavior managers are concerned with and for the rewards a person seeks in an organization. We will consider the theories that explain needs as motivation that were developed by several theorists, including Frederick Herzberg, Abraham Maslow, Clayton Alderfer, and David McClelland.

According to Abraham Maslow, need is a psychological or physiological deficiency that a person feels the compulsion to satisfy. It can create certain tensions that influence a person’s work behaviors and attitudes. The scientists formed a theory on the basis of his definition of need, which presupposes that people are motivated by various needs, which exist in a hierarchical order. His premise is that a satisfied need is not a motivator, and so, only an unsatisfied need can influence behavior (Simons, Irwin, Drinnien, 1987).

The following two principles lie in the foundation of the Maslow’s theory:

The levels of needs defined by Maslow are presented below:

Frederick Herzberg developed another framework for understanding the motivational implications of work environments (Lundberg, Gudmundson, Andersson, 2009). He has developed two-factor theory, which identifies the factors that influence performance level of people:

According to Herzberg’s two-factor theory, managers should ensure that hygiene factors are adequate and only then build satisfiers into jobs.

Clayton Alderfer developed ERG (Existence, Relatedness, Growth) theory. It is founded upon Maslow’s hierarchy of needs. First of all, he collapses Maslow’s five levels of needs into three (Arnolds, Boshoff, 2002):

David McClelland developed a theory, according to which everyone prioritizes needs in a different way (1987). He also believes that it is done on the basis of empirical evidence. He defined the following three needs:

Each need is associated with a distinct set of work preferences, which can help managers tailor the environment to meet these needs.

High achievers differ from others by their desires to do things better. They are strongly motivated by job situations with feedback, personal responsibility, and an intermediate degree of risk.

Those who have a high need of power are likely to follow a path of continued promotion over time. They usually enjoy being in charge and prefer being placed in competitive and status-oriented situations.

People with the highest need for affiliation seek social approval, companionship, and satisfying interpersonal relationships. They usually are more interested in work that provides social approval and companionship; they strive for friendship and prefer cooperative situations.

On the basis of the conducted analysis of widely-spread approaches to accountant management, it is possible to single out the following recommendations and conclusions:

IAS 1 requires that at the minimum, any business should prepare four types of financial statements. Balance sheets indicate what the entity owns and owes at that particular point in time. They include assets, shareholder’s equity and liabilities. Assets are the properties that the companies own that can be valued while liabilities are the amounts…

SECTION (A) Executive Summary The Oxford Tours Company has formed a special program to provide travel packages to people all over the world to experience a rare opportunity to visit London in its celebration of the 2012 World Olympics. The 2012 Olympics will be held in London around July- August 2012. The tour services are…