John Dewey is the American philosopher who can be seen as the leader of the pragmatism school of thought. This pragmatism school of thought is in essence the naturalistic view that knowledge surfaces when a human being actively adjusts to his surroundings instead of observing the world in a static, inactive manner (Internet Encyclopedia of Philosophy). His philosophy is focused on stretching the mind in an active manner and experience. Dewey himself is evidence for the experiences, he has used theories of “modern biology, psychology, physics, and the historical sciences” (Hook, 2008, p.3). His influence from these theories and on these theories is so crucial, that it is said that John Dewey’s ideas and persona have been part of shaping intellectual America (Hook, 2008, p.4). 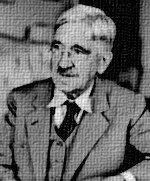 Every person and his thoughts are shaped by his environment and that is no different for this philosopher. John Dewey was born on the 20th of October, 1859 (Hook, 2008, p.10). The place of birth of John was Burlington, Vermont in which he was raised in a homogenous, almost classless New England community with rarely any outliers or extremities. It was in that peaceful and yet liberal environment that his ideas on justice and equality were ingrained on him. But it was in Michigan and Chicago that he began to develop his ideas which were brought to final fruition in the cosmopolitan city of New York (Hook, 2008, p.5).

His Michigan and Chicago period were marked by difficulties in the sense that it was a hard life to live back then. It was a period in which thinking, good thinking, could make a great difference. It was at the University of Chicago that John could reap the ideas he had and there he created his pattern of thoughts that would make up his philosophy. When John was a student, the context of studying and university were ingrained with religion and theology (Hook, 2008, p.11). However, John based his pattern of thoughts on psychological foundations and focused it on education and learning which had the implication that “genuine learning can only be achieved by doing” (Hook, 2008, p.8). With his ideas Dewey changed how the American education system was viewed and assessed. He transformed the framework of thought of the education system and became a famous person because of it.

After graduating from the University of Chicago, Dewey gave lessons at a school in Pennsylvania while he himself continued to educate himself further in philosophy. He continued his studies in 1882 at Johns Hopkins University and did his dissertation on the “Psychology of Kant (Hook, 2008, p.12,13). Influences on Dewey were Hegel (Hook, 2008, p.15).

In the cosmopolitan city of New York, he could elaborate his ideas further because the city with its financial and industrial influence and the presence of every social culture and subculture was like a laboratory for him (Hook, 2008, p.8).

His ideas were very influential and over time were used in most disciplines such as economics, art, psychology and education but also fellow philosophers, scientists and peers. His ideas became not only famous in the US but worldwide and he was proud to be an American. He was unique as a philosopher in the international arena because most of the philosophers were not known outside of their own borders, John Dewey was and he was revered as well. Because his thoughts were revolutionary for the education system, he received requests from educators and education systems from all over the world (Hook, 2008, p.10).

However, his persona remains somewhat hidden because he rarely spoke or wrote about himself. His interest was always outward oriented, not inward or regarding himself. He loved books and the ones who read them (Hook, 2008, p. 18). He worked until he died in 1952.

Persuasive Essay on Lewis and Clark

Lewis and Clark Persuasive Essay Expedition that started in May, 1804, was an important milestone in the American history. It was headed by William Clark and Meriwether Lewis and commissioned by President Jefferson. Among the goals they pursued there were commercial and scientific – they aimed at discovery of the animal life and plant diversity,…

Martin Luther King as a Shaper of Modern Western Society

Martin Luther King is one of the most notable figures of the modern American history, one, without whom the picture of the contemporary USA cannot be fully comprehensive. Although today he is mostly remembered for the way he met his death, half a century ago it was the way he led his life that influenced…

The decline of the Roman Empire in 476 CE brought to and classical antiquity. A new era was born in world history, which would see the rise of several cultural zones such as the Medieval West, the Mongol Empire, and the Byzantine Empire. The fall was characterized by failure of the empire to effectively or…

Didn't find the right sample?
We’re ready to complete a custom paper for you anytime! Leave your email to receive our updates and offers.
By clicking ‘Sign me up’, I irrevocably accept WriteMyPapers.org’s Terms and Conditions, Cookie and Privacy Policy and confirm my acceptance.